PXG is a new brand in the world of golf but one that’s already making names for itself. The brand, designed by Bob Parsons, has a stellar line up of irons as well as some other clubs worth mentioning too. We’re here to review their best irons and what else they have to offer, as well as a look into how and why the company was started.

Have you ever been out shopping around for new golf clubs and thought, “Gee, these should be more expensive?” Most of us probably hadn’t but for millionaire Bob Parsons, the founder of PXG that was some of his thinking when he started his very own golf brand.

PXG has only been around since 2014 but since then, they’re made a big name for themselves in the world of golf. The PXG irons have been especially popular, so we’re here to review the latest and greatest ones they have to offer. 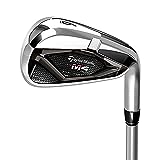 For a new brand, there isn’t a complete line up of irons yet, so we’re going to look at some of their others clubs that are making waves. After this review, you’ll have a better understanding about what has made this newcomer already so prolific in a tough to crack market.

The Story Behind PXG

Bob Parsons is a self-described golf nut, and he claims that at one point he was spending $250,000 a year on his habit. His quest to find clubs and irons that would perform better than others meant that he was spending his money elsewhere and the dollars were no object. Soon he realized, instead of spending all of this money from other brands he could create his own.

Parsons himself said it was originally a project of vanity, as he wanted to see just how well he could create a new set of clubs. What would set his apart though was that the price tag would be whatever was necessary to make them the best, rather than trying to appease everyone with a mid-range iron that was affordable by all.

Parsons Extreme Golf was born from here, and he enlisted the help of former PGA Tour player Mike Nicolette who he’d met previously playing at the prestigious Whisper Rock Golf Club in Arizona. His task was to design an iron that would hit harder than any others on the market without making the loft stronger, and it had to look unique. What set them apart was there was no limit on what it would cost, and the PXG iron was born.

Another thing that sets PXG apart is their refusal to work on an annual cycle as many other golf brands doing, releasing something new once a year. Parsons and his team are constantly working on improvements and if they come up with an idea that’s worth producing, they’ll release it. With such success from their irons, they’ve also included others in the lineup so we’re here to look at the best so far.

When Parsons revealed his first line of irons to the world, there were plenty out there who were skeptical. For such a high price, it seemed like a huge risk to take from someone who had never designed golf clubs before, merely played with them, and this was a risk that PGX had to take as well.

The first irons were released in 2015 and reviewers who gave the clubs a chance were surprised at how well they performed. The hype quickly grew and soon golfers of all skill levels had a PXG iron and were bragging about just what it could do on the course, provided you had the money to get one, of course.

As of today, there are many professional golfers who use PXG and some even exclusively. Most recently, we’ve seen Ryan Moore, Zach Johnson, and Lydia Ko with their own, showing exactly what they can do when they’re handled well. At last count, the company sponsored 17 professionals with that number only continuing to grow as the months go and more revolutionary irons are released.

Although they’ve only released a few irons to date, the PXG name is already well respected due to what we’ve seen so far. For those in search of a quality iron and are able to spend extra to get something expertly crafted and seriously impressive, these are worth checking out.

Priced at around $2,800, initially reading this cost might be enough to make your head spin. However, just by reading about how they were made and the effort that went into them you’ll see why. PXG crafted a hollow-construction iron filled with elastomer so that it keeps the sound and feel of a traditional club but with extra strength.

They’ve positioned tungsten weights around the perimeter so that it’s equally forgiving as well as strong. If you’ve got the money, this club would suit absolute beginners who need help with their game or serious professionals who have the funds for its world-class technology.

This is the newer model of the 0311 and it’s a better choice for those in the market for a game improvement iron. Although they originally had a cavity-back design in mind, they went back to their classic hollow construction style instead. However, this model is considerably lighter and with a far better look.

The face is extra special on this iron as it’s ultra-thin but with a whole lot of flex. To make it feel stronger than this thinness will allow, they’ve injected it with thermoplastic elastomer into the cavity. Priced at around $2,800 for the set, it’s pretty standard for PXG irons and an investment that will surely change your game for good.

The PXG 0311 T is their Tour Performance Iron and if the slogan ‘better than the best’ is anything to go by, you’re guaranteed absolute quality. PXG has crafted one of the sleekest looking irons ever seen on the course but they’ve backed it up with technology that works from the inside out as well.

Just like their other irons, these don’t come cheap, so you can expect to fork out $2,800 for a set of eight. This is another one of their hollow designs that’s been filled with elastomer and uses a high strength steel to create the face. It’s thin but strong, which seems to be PXG’s signature move. If you want them a little cooler, you can get the Xtreme Dark finish for an extra $100 a pop.

Other Notable Products from PXG

Although the irons are the clear winners in PXG’s range, when they realized they had so much success with them they decided to branch out. They now make drivers, hybrids, wedges, and more, and we’ve found the best in each category for you to experience.

If you’ve been wanting to get your hands on a PXG but simply can’t afford to spend a couple thousand dollars, the 0811X/LX is a much more affordable option. Retailing for around $850, this won’t hit as hard as the irons but it’s still got their signature light feel with heavy drive. This gives you a chance to experience PXG technology without feeling guilty about how much you spent.

Using a carbon composite crown means less weight as well and you have ten adjustable sole weights to give you a different spin each time. The TPE has been positioned above the sole which saves more weight and also keeps the sound in check, so they haven’t spared any of their world-class technology on this cheaper model.

The first hybrid that PXG ever made still doesn’t disappoint, and as it was named after the code for a sniper in the Marine Corps as it can deliver on a target from a position far away. The 0317 doesn’t disappoint here but it plays more like an iron so keep that in mind when shopping for a hybrid that’s going to suit your needs.

Just like their 0311 iron, this hybrid makes use of the screws in the back of the head that help vary the weight.  You’ll get seven weights across the back which consist of 3 titanium ones and 4 silver tungsten screws, and they all work perfectly together. These weights give you up to 35 different positions to alter the flight of the club so you can find that ideal one every time.

As part of the leading 0311 line, it’s no wonder that the wedge in this set is a standout. Just like the irons, these wedges have been made with the same S25C carbon steel so it feels like a dream.  By using a narrower heel on the design they assure that you’ll maximize your shot making potential by removing some of the bounce.

The pattern etched on these is similar to others in the set and along with the wide grooves, they’ve been purposely placed there to give you greater control. The sole tapers off and when coupled with the 11 different weights placed around it, you’ll be able to increase the MOI so that you can always hit the sweet spot.

There are three different models that fall into this category but each is as good as the last, so all deserving of being on our list. You have the option of either chrome or black PVD finishes to match your style and at a cost of around $500, they’re probably one of the cheaper PXG products on the market.

Very fond of their thermoplastic elastomer, they placed a piece of it into these putters just behind the stainless steel face insert. The result is a firm impact that has a soft sound, so fewer distractions. All made with stainless steel bodies and a mixture of both tungsten and titanium for the weights means you’re using the best of the best when it comes to materials.

Just like their other clubs, the PXG 0341 has been named after a military position. The 0341 is a mortarman and that’s why they named this stealthy fairway wood after it. Just looking at this wood will show you it means business, and it’s got a sleek black finish to top it all off. You’ll also spot 11 weights that aren’t just there for show, and they’ve proven that this is a lucky number in their other clubs.

With all of the possible adjustments, you’ll get 462 possible combinations to use and that’s not even counting the eight different loft settings. The shape helps to it perfectly curve around the ball and it looks like a classic but with a modern touch.

A New Brand With An Already Solid Reputation

When you consider just how new PXG is when compared to some other classics on the market, it’s a wonder they’ve managed to have as much success as they already have. However, it’s just a testament to how great their irons and other clubs are, and if you can spare the money it’s well worth a hit.

Parsons and the team at PXG make no secret about the high price of their products, and they understand that they’re in the luxury market. They go so far as to not even attend tradeshows as they believe their product is in another league, so that’s for you to find out.

PXG takes pride in using the latest technology and innovation in everything they make and they set no limits on time or budget for what they make. As their customers, we’re the ones who get to benefit from these groundbreaking changes, and if it means spending a little extra to play with an iron that’s like nothing we’ve ever experienced before, we’re happy to do it.