TaylorMade is a name synonymous with golf, and over the years they’ve released plenty to be proud of. Their clubs and balls are seen being used by professionals on the circuit to absolute beginners trying their hand at golf for the very first time. We take a look at some of their best products over the years and what made them so great.

When TaylorMade Golf Company was incorporated in 1979, owner Gary Adams leased a 6,000 square foot building in Illinois after borrowing $24,000 on his house to set it up. With just three employees and a sale of only one item, his 12 degree left metalwood, he began a business that would wind up to be one of the biggest golf product companies in the world.

Since that very first metalwood, the company has been known for making innovative products that change the way we look at golf clubs, like the TaylorMade M1 Irons or their Spider Interactive. Over the years, they’ve created some iconic clubs, with a special focus on drivers, and we’re going to look at some of their best products currently and throughout history.

Irons are an area of specialty for TaylorMade and they’ve had some pretty iconic models over the years. Whether it’s their new or old designs, you can be guaranteed you’re going to hit with strength with any of their irons. 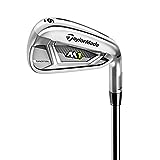 These irons were released in 2016 and they managed to solve a problem that most manufacturers have faced for years: do you make irons that are forgiving or ones that look good? The TaylorMade M1 irons were the first of their series but iconic as soon as they were released, and featured compact club heads that made them close the hybrid/cavity back area.

Using their Speed Pocket technology and a thin front wall in all clubs from the 7-iron up means you’ll get a super fast strike every time. Overall, this is a thinner and shorter iron but one that looks sleek and manages a lot of forgiveness. 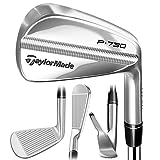 According to TaylorMade, their P730 irons have been designed for the best tour players in the world, but that doesn’t mean you can’t benefit as well. TaylorMade spent a few years off from making muscle backs since their hugely successful Tour PReferrer MB of 2014, but this one proved they know how to do it right.

The blade length is 73mm so more compact than the MB and it has a thinner topline and sleek appearance. The construction has been forged from one solid piece of 1025 carbon steel and the milled clubface has tiny precision milled grooves that give you the ideal strike on every swing.

These irons were released in 2009 and are still a favorite among better players, and the heads are just oversized enough to give them the forgiveness that newer players need. Rather than failing to make a better players iron that looked too bulky, these irons resemble a blade and meant that again that TaylorMade had managed to do what no other had.

Nick Faldo helped to design these clubs and it’s obvious. These have been designed to get the club through the turf without resistance which is something we can all benefit from. With an extra grind on the sole that wraps around the head, it looks cool and operates even better.

Fairways woods aren’t just great for the fairway, they can actually be used off the tee as well. Although they might not get as much recognition as some of the other clubs, looking at the best ones from TaylorMade show how great they can be.

TaylorMade never did anything in halves, and their M1 is a testament to that. The TaylorMade M1 drivers have a whopping 5,800 possible settings on each head which means they’re 132 percent more adjustable than the previous model.

Although this one looked like the original, there was so much more on offer. The sliding weights can be moved to tweak your shots as needed and they placed more titanium allow in the body. This, along with the carbon composite used, means it’s weight saving and will launch your shots without the spin.

Still regarded as the best fairway wood that TaylorMade ever made is their V Steel. Getting the name from the V shape that extends from the sole, giving it less club touching the turf. The purpose of this is to reduce the resistance so that you get more from your swing.

The TaylorMade V Steel Fairway Wood is still available to purchase but their customer department does various upgrades depending on what you need. You will have to custom order to get the pleasure of playing with one or find a quality second-hand model to test out. 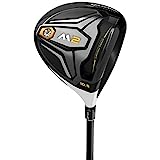 Drivers are the heart and soul of TaylorMade, and not long into their production of clubs, they decided that they would make this their focus. These names represent some of the best ever TaylorMade drivers in history.

This is the driver that started it all. The Pittsburgh Persimmon Driver was one of the company’s earliest metalwoods and Gary Adams, the owner, and designer of the brand made it from 12-degree stainless steel and called it the Taylor Made. In 1979 the company was able to convince some Tour players to use the driver and when Ron Streck won with it in 1981 in Houston, it quickly became a global name.

If you’re someone who likes an oversized driver, look no further than the 300 Series. This was their attempt to join the pack who were making huge drivers, and they managed to do it better than anyone else. There are three separate titanium drivers within this range, the 300 Ti, the 320 Ti, and the 360 Ti, each getting bigger as they go on.

Adjustability and versatility is again key with the 300 series and it’s evident with all of the settings you can change. There are 20 different combinations available and different lofts, so you’ll have no trouble finding your ideal driver. 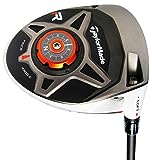 The TaylorMade R1 was released in 2013 and it was a unique look for the brand with huge graphics on the crown. This was the next model after the hugely successful R11, and when compared to them it’s a lot more forgiving.

There are also plenty of adjustable options which is what TaylorMade wanted when they tried to design a driver for everyone. With 460cc inside the head, it’s got a pretty wide face for forgiveness without feeling too amateur for those better players. 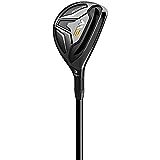 The hybrid is a special club reserved for people with unique needs. Although not really an area of specialty for TaylorMade, they’ve spent the last few years especially really focusing on these clubs, with great results.

This is a futuristic looking hybrid that suits people who want to be more modern than the dated classic clubs. It has a clean, black and white design that looks so cool you almost don’t want to touch it and was made to be a long hitter.

Although you have to be a better player to really benefit from this, it’s easily one of their best. There isn’t much forgiveness for it but it does have some workability, so keep that in mind. This is a solid hybrid that would do a decent golfer very well, and one of the best hybrids TaylorMade has even designed by far.

This is a hybrid that’s better suited to those looking for forgiveness, and would suit the amateur golfer best. It has movable weights that really give you versatility and allow you to decide exactly how you need to use it.

Part of the iconic M1 series, this hybrid is known for adjustability. What makes it so great is that you’re able to use it within different lies on the course because of it, and it also features speed pocket technology that will amp things up during mishits.

Wedges are a tricky one to choose when it comes to fitting out your golf bag, but TaylorMade always focuses on simplicity with theirs. With the look and feel that you need to get out of sticky situations, these are a trusted tool to have. 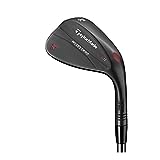 Ask any reviewer of golf clubs and they’ll tell you these remain one of the greatest of all time, in both control and feel. These wedges get their name from the Z Grooves which are named after the machine that creates them and they offer 10 percent more than the previous Y grooves volume.

If you need absolute control, this is the wedge for you, and you’ll get consistent with every shot. They also have a cool classic shape that looks like a teardrop so it’s a must-have for those with a bit of nostalgia for the good old days.

First released in 2009, and then upgraded throughout the years is the TaylorMade XFTs. Although this brand is known for its drivers, these are the wedges that will go down in history, and it’s all thanks to the detachable face. When the grooves finally wear down, as they do, you just replace the head and don’t have to fork out hundreds for a new club.

This is a great game improving wedge for those who need it, and with the smoother clubhead, they offer you won’t feel too much grip on your ball. You’ll be able to change the head up until 2024, so there’s still plenty of time to benefit from this iconic wedges.

The putter is often overlooked in your golf bag, but it really shouldn't be. A large majority of your shots require one, so what better brand to trust than TaylorMade to provide them? Their putters might not have been their main focus throughout the years, but they’ve managed to create some iconic designs nonetheless. 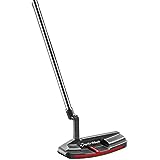 This is one of the most famous clubs of all time, let alone putters, and the Taylormade OS CB Daytona will no doubt go down in history. With a large head that’s unlike anything we’d seen before, it’s been able to provide stability on those crucial shots when you’re really relying on the putter to seal the deal.

The weight has been moved to the perimeter of the club and they’ve packed the cavity with lightweight thermoplastic foam to save some mass. Finish that off with a sleek design featuring a red bar, and you’ve got an instant winner.

One of Golf’s Most Iconic Brands

TaylorMade came from very humble beginnings to become one of the largest golf brands in the world. Now owned by Adidas, it’s clear that this sporting icon is only going to grow larger and spend more time developing technology and innovation that will help with your swing.

Both professional golfers and everyday sportsmen rely on this brand for all of their club needs, with some only using them exclusively. Whether you prefer the older designs or like to stay on track with the latest technology, you surely won’t be disappointed.

Looking back over what TaylorMade has already achieved in a seemingly short time when compared to some other brands is a testament to their style. Always wanting to come up with new and exciting ways to design clubs, they will no doubt continue to do the same in the years to come.