A golfer is only as good as his clubs, and if you’re someone who believes this you’ll want to know you’re working with the best. 2018 has already been a stellar year for golf equipment and we’ve seen the best golf clubs come out already and wow us with their tech, design, and playability. This is a comprehensive list of the top rated clubs in each category so that you can be sure you’re onto a winner.

Never before have we seen so many new and amazing golf clubs bursting onto the scene. Where there used to be just a few notable mentions each year, it seems that 2018 is the time when brands of all sizes are showing us what they’re made of.

Although the year isn’t over yet, there are already a number of entries on the best golf clubs of 2018 and we’ve picked some in each category. There are drivers, irons, putters, and more, so feast your eyes on the amazing clubs that have been released already this year.

There are two types of putters that golfers need to know about – the blade putter and the mallet putter. You can expect to spend a few hundred on one of these but they’re well worth it. We’ve found the best of each that you can add to your bag so you can hit those finer shots with ease. 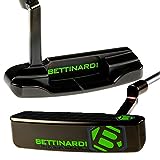 The winner for the best blade putter and the coolest looking has to be the BB Series from Bettinardi. These guys know a thing or two about putting but they managed to change thing up this year by offering a face milling that’s softer than anything we’ve seen before.

With a bright electric yellow design on the sole and a matte black finish, this is classic golf at its finest. Made from soft carbon steel and with heel-toe weighted blades, the putter is simple but effective in putting the finishing touches on your shot. 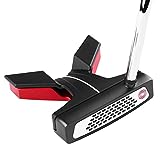 Coming in at Price not available a pop is the Odyssey Exo, and it’s worth every penny. If you remember their O-Works series you’ll see that instantly it has more of an outward facing polymer insert which gives it an overall better feel.

These might be bulky looking but you’ll be hard pressed finding a mallet putter that isn’t. However, Odyssey has managed to make theirs look sleek somehow and also used a wire frame that makes it more stable than ever. Using their improve initial roll technology, this is definitely the top pick for 2018.

Callaway is an absolute pro in the wedge market and the Mack Daddy 4 has proven it yet again. Here they’ve reached for the latest and greatest technological advancements to bring a performance like you’ve never seen. The fitting options and spin technology are the most notable, but there’s plenty more to love as well.

You have the option of two milled groove designs which will depend on the loft you go with, and there are nine lofts with four sole grinds. The MD4’s ridges rise from the surface which means even more possible contact. When it comes to overachievers, the Mack Daddy 4 is certainly one of them.

Within the iron category are so many different ways you can go. Depending on where your skill level is and what parts of your game you want to focus on, there’s bound to be one set out there that’s right for you. Here are the best of the best that we’ve found so far in 2018.

While there were plenty of great players distance irons released this year, none looked as cool as the Cobra Forged TED Black. At a cost of around $$$ for the set it’s not too expensive and along with the irons you’ll also receive a set of Cobra Connect sensors that help you track and analyze all of your shots.

The thin steel face insert and expertly placed tungsten inserts are what makes these irons so impressive. You’ll get a great center of gravity behind the impact zone and plenty of forgives. If you’re wanting to improve your distance, these are definitely the way to go. 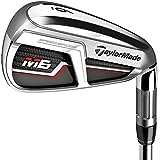 Sure, we know that Taylormade can be expensive, but every single cent is worth it when you finally get to play with one. The TaylorMade Golf M6 Wedge offers something completely different to others in the category and isn’t too bulky. While they did plan on doing a cavity back style, they decided to scrap it as it felt too similar to what they’d done already, and Taylormade is not about this way of thinking.

They don’t come cheap and you can expect to pay more for a set of eight. However, as soon as you pick one up you’ll notice the hollow construction and fast-flexing face which will shave plenty of points off your game.

We don’t hear enough about Honma Beres if we’re being frank, but they’ve managed to make a set of super game improvement irons that will get everyone talking about them for sure. These are the type of clubs that look like ultra rich movie stars own but with a classic retro touch, so you’ll feel undeniably suave playing a round with them.

The Honma Beres IS-06 Irons aren’t cheap but all that extra money is worth it. These are the perfect clubs for slow swingers but would look just as good on anyone else. With a 50 gram lightweight shaft, this will help even more, and it’s got a maraging-steel face that improves ball speeds even more. Just one swing with this and your game will be changed forever. 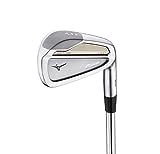 When you spend three years with your research and development team coming up with a design for a new players iron, you’d want to be sure that it gets the job done. Thankfully for Mizuno, they didn’t disappoint with their MP-18 MMC which were three years in the making. What makes them even better is that they’re reasonably priced less for the set which makes them more affordable than others.

The heads on these are made from carbon steel but they’ve had titanium forged into them so that they could use the weight elsewhere. This shifted weight gives you more forgiveness and it’s got tungsten plugs near the toe in the cavity that adds to this forgiveness even more. A solid choice for player’s irons and one that’s got every new piece of tech you could hope for. 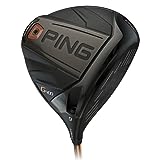 What’s the one brand you think of when you need forgiveness? Ping. The brand is famous for making even the worst shots into something amazing and they continue to develop better ways to do this, like what they’ve done in the G400.

Every driver in this set has ridges down the side that reduce drag and an oversized head that will glide with ease. Within the set, you have a low spin LST and well as a slice reducing SFT, among others to choose from. They might look smaller than previous models but that doesn’t mean they don’t perform.

Callaway is known for sticking with a design when it’s done them proud, and that’s exactly what’s happened with the Epic hybrid. This one looks just like the Epic fairway wood and driver and is made from the same light carbon composite. With the spare weight up top, they’ve managed to make your ball launch with less spin but more height.

One of these hybrids will cost around $ and there are four lofts available to choose from with an adjustable hosel that goes eight ways. The versatility on offer as well as the flexible rim means you can choose exactly what you need to improve your game. With this many options, there’s something to suit every player and you can easily adjust them as your skills grow.

TaylorMade has improved their famous M1 and M2 range to bring the M3, which takes home the prize for the best fairway wood. Priced at around $ this is well worth the money, and although it’s in the mid-range for budget it offers a whole lot more in terms of design and technology.

One notable difference is how they’ve added more length to the curved slot in the sole which means anything that’s hit low face will still have a lot of impact. They’ve also added carbon composite panels to the sole and crown which moves the center of gravity down. Overall, you get less spin and more impact when you need it.

Although these are a set of irons, if you’re looking for one simple way to improve your game then this is the way to go. Within the set is everything from a pitching wedge to a 3-iron and it will cost you a fair bit, but we think it’s all worth it.

These are clubs aimed at players with a low handicap so you have to be experienced to benefit from them. They have a slightly wider back which makes them different from other irons and it means you’ll really be able to lift the ball. The Mizuno MP-5 Set is forgiving and allows you to work the ball to your advantage, even if they are just irons.

If you’re new to g​​olf, the thought of shopping for all of these separate clubs can be enough to turn you off completely. That’s why you need a quality set where it’s all been taken care of for you. The Callaway Strata Set is exactly that and it has a limited number of clubs that will be able to serve you well on the course.

They have a men’s and women’s set with some difference in each. The men’s set gets two additional clubs with a 6-iron and 3-iron, in addition to the driver, 5-wood, 5-hybrid, 7-iron, 9-iron, putter, sand wedge, and carry bag.

These clubs will help you control the ball even if you feel like your skills aren’t there yet. Although they’re not designed to be a lifelong set, they will serve you well as you learn the ins and outs of the game and are ready to upgrade to something more serious.

The Most Important Tool in the Game

Sure, your skill is important in the game of golf and there are many other factors in play, but without a quality club, it just won’t be the same. Whether you’re looking for an intimidating new driver or want the complete starter set to develop your passion for the game, these represent the best golf clubs on the market.

Unless you’re super rich there’s no way you’d be able to go out and invest in all of them today. Instead, you should focus on what area of your game needs improvement or where you want to push yourself farther, and those will be the choice for you.

As we see more and more amazing technological advancements and design innovation occurring all the time, there’s no doubt it will get harder to choose the best golf clubs. However, any of these could mean big things for your game, so don’t be afraid to test out something new. Just adding one to your bag will be a sure-fire improvement, so don’t hesitate any longer.